While bow hunting last year, it occurred to me that success can be divided into three equally important pillars. To put it in perspective, I created the diagram below: 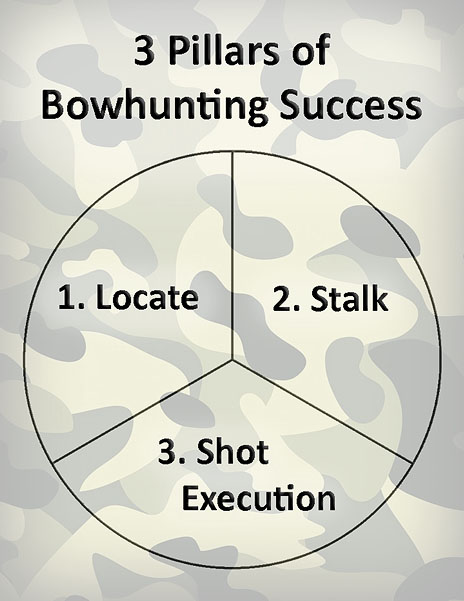 Think back to your last hunt. Were you successful? If not, which pillar did you fall short on? Since each step is equally important, it should be easy to pinpoint where you need improvement.

Let’s break it down:

The first step, locating a buck, is something you can start doing right now. The best way to locate more bucks is to study their behavior, habitat, and ecology. You can also research harvest data and biologist’s reports on the unit you are planning to hunt. Then later, the scouting begins.

The second step, stalking a buck, is not always intuitive. Getting close to big bucks is the hardest step to master because, unlike shooting, it’s something we rarely get to practice. What it really boils down to patience: knowing when and how fast to move depending on conditions such as wind and cover.

Finally, shot execution. Almost everyone I talk to is pro-class shooter…until their arrow flies wide of an unsuspecting buck. Bowhunters are lucky just to get one or two shot opportunities in a season, so it’s very important to prepare for real-life hunting scenarios in advance. The best way to do this is to practice shooting in different positions, unknown yardages, around objects, and in adverse conditions such as wind.

I’ll certainly keep this “wheel of success” in mind when going into the next hunting season. I call it a ‘wheel’ because it just keeps on turning, year after year. After completing all three steps in a season, it begins again the following year. The goal is to keep the wheel from going in REVERSE, which only happens when you blow a stalk or botch a shot.

Good luck on a great buck this year!