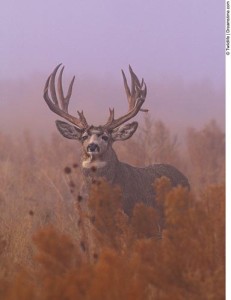 We could argue all day about what the mule deer’s greatest strength is, whether it’s their superfluous hearing, specialized eyesight, or powerful sense of smell. The fact that they must live in the outdoors year-round under extreme conditions requires them to have many strengths. But in my observation, the mule deer’s greatest strength is evasion.

In most instances, as you go sneaking quietly through the woods, the deer have already sensed your presence and are quietly sneaking away from you. Novice hunters aren’t usually aware of this, and if they don’t see any deer all day, they just assume there aren’t any around. Well, that’s exactly what the deer wants you to think! If every time a deer sensed a hunter, he went flying out of its bed and bounded noisily away, then experienced hunters would know there were deer in the area and continue putting more pressure on them. Instead, smart bucks have learned the art of quiet evasion.

As a rule, you’ll hear a lot more deer bound away than you’ll ever see, and you won’t see or hear even more deer that sneak silently away from you. But if you learn to slow way down and play the wind just right, you’ll eventually get within bow distance of an unsuspecting buck. This still doesn’t guarantee a shot because in most cases the buck will still sense some sort of danger before you can raise your weapon. He’ll suddenly explode from his bed and fly out of sight, carefully keeping as many trees as he can between him and you as he goes. That’s just part of hunting. There’s no way to fool all the deer all the time.

Big bucks have also developed a tactic for avoiding stealthy hunters by “lying low.” Since the deer doesn’t detect the stealthy hunter from a great distance, the sudden appearance of a hunter at close range will force the deer to make a decision: either he can flee out of his bed and alert you to his presence, or he can lie low and let you walk by, hoping you don’t see him. On numerous occasions, I’ve had bucks explode from a bed within just a few yards of me. Obviously the deer knew I was there beforehand, but chose not to flee until danger was imminent.

Since most bucks you encounter evade you one way or another (sometimes even after being shot), then evasion is obviously the mule deer’s greatest strength. The best advice I can give you is this: Never underestimate a mature buck. In most cases, the best you can do is to get in the vicinity and hope things play out in your favor. Be patient and let things unfold slowly, at nature’s pace. Even if it takes all day to stalk a buck you’ve spotted, your best chance of success is just getting close. Once the buck has sensed you, the jig is up and you’ll have to go find another one.