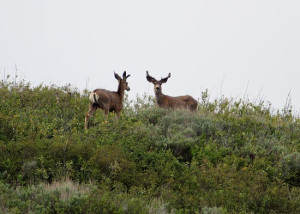 Esther and I hit the top of Monte Cristo over the weekend. The snow subsided enough to get above 8000 feet. We spent the first day beating the mountain to death and exploring a promising new area completely devoid of deer. Driving back to camp we spotted these bucks on a hillside. 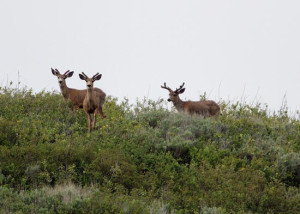 It’s still early, but the monsoons of May have the bucks growing promising antlers. The two bucks on the left are likely two-year-olds, and the buck on the right is a mature buck with a potential outside spread of 22 inches or more. 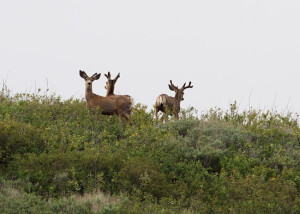 The bucks didn’t stick around long for pictures, but that’s okay. Just seeing bucks in the Cache unit made us hopeful.

Here’s the lessons we learned on this trip:

Just one word of caution: The high elevation roads still have patches of snow and deep mud, and we almost got stuck a couple times. Not far from camp we ran into this abandoned Hummer-in-a-bog, sunk up to the axles. The poor fellas were able to winch it out the next day, but it just goes to show you that no vehicle is safe from the muddy clutches of the mountain. 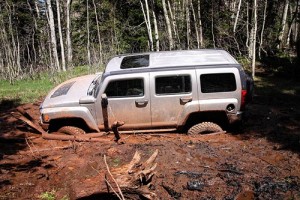