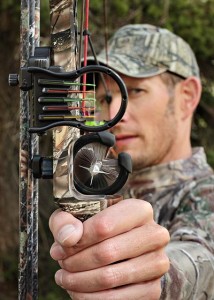 How to Aim Traditional & Compound Bows

In this short article I’m going to explain the proper way of aiming traditional bows and modern compound bow.

Traditional bows (recurves and longbows) are aimed in the following sequence of steps:

There are other ways of aiming, such as instinctive shooting. With instinctive shooting your focus is on the target rather than the arrow tip. After dozens and dozens of arrows, you will hopefully fall into a natural shooting rhythm in which aiming is unnecessary, similar to throwing a baseball.

Either aiming technique is fine. In time you’ll figure out which way works best for you.

Modern compound bows generally use a round front sight and a round, rear peep sight that’s built into the string. As you draw the bowstring to your aiming eye, the small peep sight becomes a large, dark, blurry circle approximately the same size as the round sight on the front of your bow. The bow is aimed by bringing the circles together, similarly to a rifle scope.

Inside the front round sight there are cascading, fiber-optic, glowing pins (anywhere from one to seven). The pins are set at measured distances from top to bottom. The top pin is usually set at 20 yards (and closer), and each lower pin is set at ten yard increments. So at 30 yards you would use the second pin down, and at 40 yards you’d use the third pin, and so on.

It’s important to remember that you are aligning the two circles into one circle, and then placing the sight pin on target. Beginner archers sometimes make the mistake of aligning the rear sight with the pin only, rather than the whole front sight (see examples below).

For the beginner archer, compound bows can be more difficult to shoot because of all the working parts. At the same time, once you get accustom to the extra steps, compound bows quickly become more accurate. All you have to do is align the front and rear sights, put the pin on the calculated distance, and touch the trigger. The bow really does all the work for you.

The basic fundamentals of archery apply to both traditional and modern bows. The main difference is how they are aimed.

In my beginner classes I always start my students with the older style bows and work my way up to modern compounds. After that, it’s up to the student to decide which weapon feels most comfortable with.