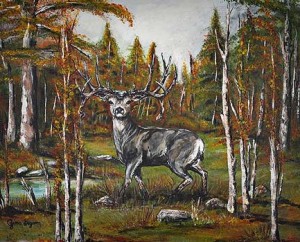 I first spotted the great buck, which I simply called ‘The Drop-Tine,’ during the 2008 season while bow hunting a heavily hunted public area of the Wasatch-Cache National Forest in Northern Utah (known as Monte Cristo by the locals). He was the most amazing buck I’d ever seen, with a wide sweeping rack and long matching club-like droptines hanging down below his ears. I had been exploring foreign hillsides all morning when I bumped him from his bed at the edge of some pines. As he quartered away I was able to get a quick shot off, but in my haste I misjudged the distance and the arrow flew low. The arrow hit some dead-fall in front of him, arrow shattered, twirled through the air, and bounced off the deer’s rump. I merely spanked him, and then he was gone. Having never seen a buck of this magnitude in the wild, and on public land for that matter, I became instantly obsessed. But for the remainder of the season I was unable to relocate him.

Monte Cristo is your standard north/south rocky mountain range in Northern Utah. It has everything mule deer love: tall mountains covered in aspen and pine trees, endless steep canyons and ridges, and rolling sagebrush hills. Water is scarce in most places, but adequate enough to support plenty of deer and elk. For decades Monte Cristo was one of Utah’s premier deer hunting spots, but in recent years, deer populations have declined drastically due to high hunting pressure and diminishing winter range. With very few peaks from which to glass and covered in dense timber, Monte Cristo is not a spot-and-stalk area. Big bucks are only found by busting brush in steep wooded areas, making it very difficult to locate them with any consistency.

In 2009 I planned to exclusively hunt The Drop-Tine for six days, beginning where I left off in 2008. But the great monarch managed to elude me up until the third evening when he busted out of some trees 40 yards above me, stood for a second atop a sagebrush knoll silhouetted against a twilight sky, and then disappeared before I could raise my bow.

By the sixth and last day I was getting desperate. My plan was to carefully still-hunt the entire mile-long ridge where he lived, as well as the adjacent canyon. For twelve hours I snuck slowly through the woods without rest, glassing every inch for antler. But he was nowhere to be found. Both physically and mentally exhausted, I was ready to give up. With my head hung low, I turned back towards camp. Seconds later, as I rounded the end of the ridge, The Drop-Tine suddenly exploded from a bed 40 yards below me in a thicket of trees. Through a cloud of dust I watched the big barrel-bodied deer bound away. I could hear him running for half a mile down the canyon and up the other side. I thought I was going to cry as I plopped down on a dusty game trail and dug my GPS out of my backpack. That day he had bedded half a mile from the last place I saw him. How do you hunt a deer that doesn’t move in the open during daylight, that is never found in the same place twice, showing up anywhere at random like a ghost?  The wise old buck lived a life without pattern; that is how he had eluded hunters for so long.

The 2009 season was over; time to throw in the towel. Every night for the following year, when I turned out the lights before bed, the image of The Drop-Tine silhouetted against the sky would pop into my head. I lay awake night after night pondering the mistakes I’d made and planning new strategies for taking the mystical beast the following year. I was Ahab, and he was my white whale. 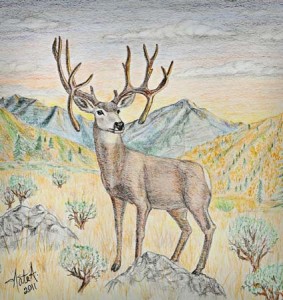 In the summer of 2010, as soon as the snow melted off the mountain, I went scouting for The Drop-Tine, but was never able to locate him. A week before the August archery opener, my brother Brent spotted The Drop-Tine while checking trail-cams in the area. Those trail cameras, by the way, never did capture the ghost’s image. Back home, the ‘Great Recession’ was taking its toll on my small photography business, leaving me with a lot more time than money. So, I used this to my advantage, planning to hunt The Drop-Tine on two separate trips totaling ten days.

The archery opener started off slowly. But on the fourth morning, while sneaking to one of The Drop-Tine’s old beds, he, along with two smaller bucks busted out of a new bed fifty yards below me. That was the last time I saw him that week. A second 5-day outing the following week turned up nothing, and I finally accepted the fact that the old buck had grown tired of my chasing him and moved to another area. At that point I had no choice but to give up. He was a deer beyond my caliber for sure, and I had already wasted way too much time and too many tags pursuing him. I thought about all the other hunting opportunities I’d sacrificed while chasing just one deer and was ready to make peace with my failure once and for all.

The next weekend, which happened to be the last day of the archery deer season, my girlfriend (now my wife) Esther and I embarked on a two-day elk hunt into the same area, but on a neighboring ridge where I’d seen more elk sign. Our objective was cow and spike elk, but on the drive up all I could think about was The Drop-Tine and how dejected I was. Esther lent a sympathetic ear to my rant:

“No one’s going to kill that buck. He’s gonna die of old age in a field one winter and there’s nothing I can do about it.”  I didn’t digress. “I wish I’d never seen him, at least then I could enjoy deer hunting again. And yet, I’ll return again next year to chase a ghost through empty woods. I have no choice…”

The next morning we woke before light and snuck into the elk area, setting up on opposite ends of a steep timber swathe used as a bedding area between feeding areas. As I sat watching the big September sun rise slowly above the horizon, all was quiet, nothing stirred. I was beginning to question our setup when suddenly my eyes caught the motion of wide antler tips swaying through the brush 50 yards downhill. Great, the elk herd is moving in, I thought as I raised my binoculars. But through the glass a deer’s head appeared, then two huge drop-tines! I couldn’t believe it. Three years and eighteen total days spent hunting for this creature, and now here he was, walking right towards me!

The buck followed slowly behind a sparse line of pine trees, offering no shot. I began frantically searching for a shooting lane when I suddenly realized that the tree line he was following ended abruptly right in front of me. If he kept his course, he’d pop out 20 yards in the open! A quick glance at grass to my left indicated the wind was starting to swirl. This is never going to happen, I thought. He’s too close. But the buck kept coming, slowly and cautiously at first, then picking up speed.

At that point I was a nervous wreck; my hands were shaking uncontrollably and my heart pounded so loudly that I was certain the buck would hear it too. In a full panic I glanced down at a sticker on my old Browning bow which reads, Stay Calm, Pick a Spot.  Okay, at least I can pick a spot, I thought as I drew my bow back. A second later the buck’s shoulder appeared and the arrow was off; I don’t even remember releasing it. As the huge buck spun and blasted out of sight, I caught a glimpse of my orange-fletched arrow sticking out of his side.

Everything was suddenly quiet again, as if nothing had happened. I sat dumbfounded for a second, awash in a swirling mix of dumfounded disbelief coupled with adrenaline screaming throughout my body. In an instant, I dropped my bow and went sprinting back through the woods towards Esther. She hopped out from behind a stand of pines, bewildered by the sight of a crazy man flailing towards her. “I just shot my Drop-Tine!” I yelled. At that moment, The Drop-Tine had finally become My Drop-Tine.

A tedious, half-hour tracking job over a sparse blood trail eventually led to the downed deer. The arrow had pierced both lungs, but the huge buck still covered 150 yards in great leaps and bounds down a nearly vertical slope. He expired on a steep, brushy slope, landing on top of his sprawling antlers which anchored him from sliding down the mountain. At the sight of the downed deer, a sense of relief and accomplishment came over me which can never be explained. After three years of failure, my wildest dream had come true, and I was finally liberated from my obsession.

Still in a daze, Esther and I pried the mighty buck free of the tangle and marveled at his majesty. I’d watched, even in fleeting glimpses, as The Drop-Tine grew bigger and more spectacular than I ever could have imagined. 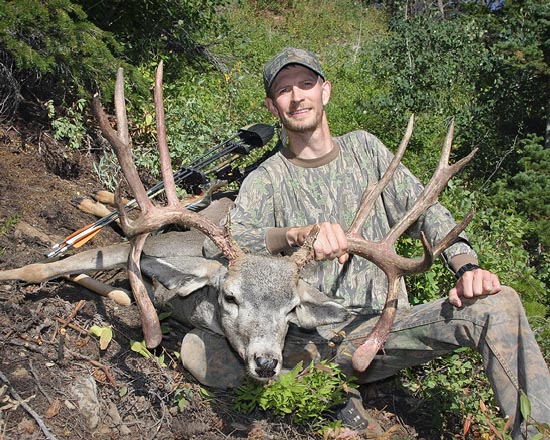