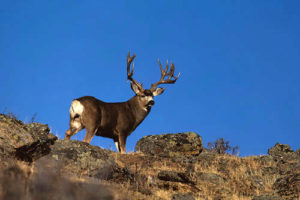 In September of 2012, I hunted the Wasatch Extended Range with a friend. The bucks in this area are just as wily as anywhere in Northern Utah, if not more. We eventually split up to more thoroughly cover one particular steep and wooded slope; I took the upper section and he took the lower.

Not far into the route, a big, mature 4×4 buck came flying up the mountain, probably spooked by my hunting partner. The buck didn’t notice me as he blew by and then paused briefly on the hillside just out of bow range while scanning for danger below. I was instantly enraptured by the buck’s majesty. He held his neck high, donning a beautiful, square rack with heavy tines standing like swords above his noble face. His muscular body pulsed with deep breaths. His head jerked left, then right, simultaneously assessing the danger and planning his best escape route. I just stood there, mouth agape, bow a-dangle. What a creature! Seconds later he picked a line of trees and bounded away, his hooves barely poking the earth between great strides, seemingly floating over the treacherous terrain with awesome speed and agility.

Nothing to do now; no point following after. The buck would be valleys away by the time I caught up with him. I was gripped with a sense of helplessness. The sheer magnitude of this creature made me feel inept in my abilities. How could I ever outwit such a powerful and wary animal? It was humbling, and exactly what I needed.