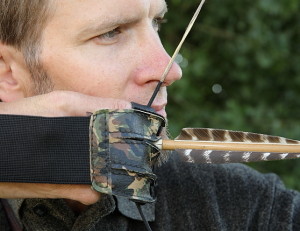 All suffering is caused by desire.  -Buddha

Over the past several years I’ve taught hundreds of people basic archery. Of all these students, only a handful are what you might call “naturals.” They follow instructions carefully, excel quickly, and break through to the next level at an astonishing pace.

But even these “naturals” eventually hit a wall: their accuracy plateaus, they fatigue out, and eventually falter. At this point they often turn to me and ask, “What now? I’ve mastered the basics, but how can I hit closer to the bullseye?”

As their intrepid instructor, it’s my duty to guide these students to the next level. The problem I had early on–and what my students didn’t know–was that I too was wondering the same thing! When you’ve mastered the basics–that is, when you’re executing the shot sequence flawlessly and still coming up short–how do you increase accuracy?

For the first time in my career I had no choice but to break down my shot sequence and see where potential weaknesses could set in. Here’s what I discovered.

The thing that gets between the bow and the target isn’t the arrow,  it’s you! Every archer, no matter how advanced, goes through slumps. A few missed shots quickly erodes confidence by allowing negative factors such as fatigue, discouragement, and desperation into the shot. It’s a vicious cycle: the harder you try, the worse you do.

Physical fatigue is the greatest negative factor, especially for the beginner who hasn’t yet developed his back muscles. Just as he begins hitting close to the bullseye, he fatigues. But there’s also mental fatigue, caused by trying to over-aim the arrow into the bullseye again and again.  Finally there’s spiritual fatigue, the byproduct of chronic misses. In the end, all this fatigue erodes confidence and creates a downward spiral.

From the Zen perspective, all suffering comes from desire. Desire, of course, is healthy and even necessary for any activity. But when desire turns into obsession, that’s when we suffer.

In archery you suffer from your very first shot. You strain physically under the weight of bow while your mind strains to aim the arrow. And when your arrow falls short of the bullseye, your spirit strains from the pangs of failure, resulting in desperation.  In short order, your whole being–mind, body, and spirit–is strained!

I see this all the time. The student grasps another arrow, and another, faster and faster while simultaneously grasping for the bullseye which is rapidly becoming an impossible target. Very quickly he creates the bad habit of high-stress archery, which can take a long time to fix.

Instead of drawing the bow to a state of high tension, we need to learn how to draw to a relaxed state. Drawing to a relaxed state removes your self from the shot by eliminating negative influences over the arrow. Hence, your bow shoots itself. In Zen archery, eliminating your “self” removes desire, which in turn removes stress and suffering. 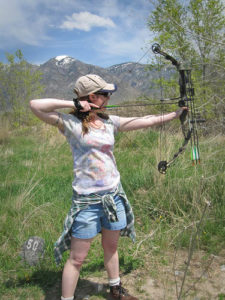 One day I approached a talented young student who was literally drawing a circle around the bullseye with errant arrows. Wide-eyed and desperate, he turned to me and pleaded, “What am I doing wrong?!” I watched him fling yet another arrow just outside of the bullseye. I told him, “You’re trying to hard.” I went on to explain that missing the target wasn’t the end of the world; that his passion for archery–the whole meditative process–was far more important than a single bullseye. I had him breathe deeply and look around at the beautiful mountains. A moment later he calmly drew his bow and sank the next arrow into the bullseye. His face lit up and he hugged me. Years later he still talks about his enlightening experience.

Your bow is designed to shoot a perfect arrow every time. The arrow only misses if you let yourself get in the way.

For every student that asks, How can I shoot more accurately?, there are a few others who comment on how meditative archery is; how it relaxes and focuses the mind. These students typically aren’t the best archers at first, because to them the process outweighs the result. I view these students as the real naturals, and they even prove it when, eventually, their arrow finds the bullseye with seemingly little effort.