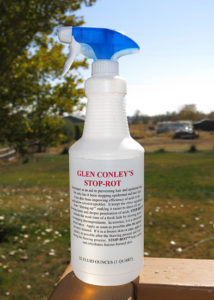 What is Stop-Rot and why do I need it?

Stop-Rot is an anti-bacterial liquid preservative that “extends the work time of a fresh hide by slowing down or stopping decomposition,” thus saving your trophy hide from decay and hair loss.

Stop-Rot was developed by taxidermist/chemist, Glen Conley, specifically for saving hides from hair slippage ahead of the tanning process. It has been used widely in the taxidermy industry for many years, and now hunters are starting to use it too. 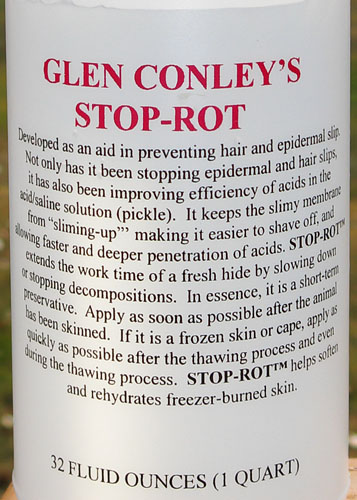 After killing your trophy animal, bacteria begins to multiply all over the animal, especially around wet and bloody areas. In a relatively short period of time, bacteria starts attacking the skin and hair follicles, thus leading to hair slippage and a ruined hide. A good taxidermist can fix almost anything, but very little can be done to save a hide with hair falling out.

Because bacteria thrives in warm temperatures, Stop-Rot is especially useful during early-season hunts that occur in August and September. Traditionally salt was used to preserve hides afield. However, salt dries out the hide and makes it virtually impossible to flesh properly before going into the tanning process.

Stop-Rot can be used on both the flesh side of the hide and the hair side. The instructions say to “apply Stop-Rot as soon as possible after the animal has been skinned.” For this reason I always keep a bottle of Stop-Rot back at camp. I’ll spray it on any bloody spots or short-haired areas like the face and ears. I just spray it on and massage it in. Be sure to spray a light coating over the entire flesh side of the hide.

Where Can I Buy Stop-Rot?

Stop-Rot costs about $22 a quart and is only available through taxidermy supply companies like Van Dykes or Trufitt. To avoid paying shipping, request a bottle from your taxidermist. Note: If you live it Utah, you can buy Stop-Rot at Trufitt’s physical store at 1744 South Redwood in Salt Lake City.

Stop-Rot should be used when hunting in warm conditions or any time you can’t get your hide to a freezer or taxidermist in a timely manner. Although I’m constantly touting the benefits of Stop-Rot, I don’t receive any sort of commission. My taxidermy business, however, relies on working with usable hides. More importantly is the preservation of your hard-won trophy.

Stop-Rot: use it or lose it!

Within the last couple decades, previously non-existent wild turkeys have flourished in Utah. Now anyone can buy an over-the-counter general turkey tag and go out hunting for these big, noisy, and tasty birds every year during the month of May. And if you apply for a ‘limited entry’ turkey tag, you can even hunt in April, a full month before the hoards and masses which exponentially increases your odds of success at these big birds.

Once you’ve harvested one of these gobblers, it seems a shame to just throw out all the unique, iridescent feathers. This is no thanksgiving bird; this is nature at its finest. Fortunately, your friendly, neighborhood taxidermist (me) now offers a wonderful way to display your turkey and relive the exciting hunt for a lifetime. I proudly present the… 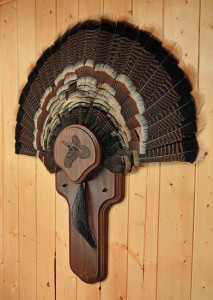 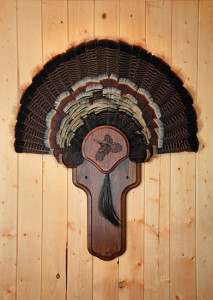 This turkey mount belongs to my brother, Brent.  Congratulations on a fine, adult strutter! 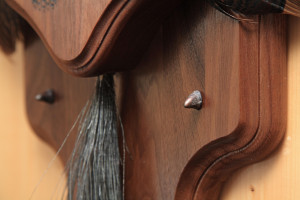 The ‘spurs’ shown here are used for fighting among breeding males.

The price for a these turkey fan mounts are $100, but I am offering a new product special, this year only, for $75!

Note: These plaques also come with an engraved nameplate (not pictured).

This is pretty neat. I got a bunch of younger deer in for taxidermy this year (as well as my own) ranging from 1.5 to 5.5 years old. So, I lined them up in order of age and shot this photo.  (Click to see larger version).

The reason they are aged in half-year increments is because all mule deer are born in spring and then harvested in fall, making the youngest legal buck 1.5 years old. Before that, they are fawns without antlers.

The buck on the far right is my late grandfather’s largest buck.  It’s a beautiful, symmetric 4×4. Without seeing the buck’s teeth, I can only guess the age at 5.5, although it could be as old as 6 or 7. It can be difficult to age large bucks by just their antlers because after they become fully mature (4.5 years), genetics plays a big part in determining antler size.

Also, very old bucks (10-12 years old) tend to regress in size because their teeth become too worn down to eat enough. At that point, they slowly starve and/or freeze to death during winter. Mother Nature can be a beast! And you thought hunters were cruel…

One thing that would enhance this photo is a true giant in his prime, aged 9 – 11 years. A ‘superbuck’ or ‘megabuck’ scoring into the mid-200s would dwarf them all.

The Art of Taxidermy

I’ve been busy doing a lot of taxidermy lately, trying to get caught up after a busy hunting and photography season. One aspect of taxidermy that I really enjoy is the meditation. Anyone who’s done taxidermy knows that it can be very time consuming and sometimes a little tedious. This is good because it gives the taxidermist plenty of time to reflect on things such as the animal’s life, which is the taxidermist’s job of reconstructing.

But dissecting and reconstructing a dead animal isn’t for everyone. I believe it takes a certain type of personality to pry the eyeballs and brains out of a skull. Taxidermists can be strange folks… 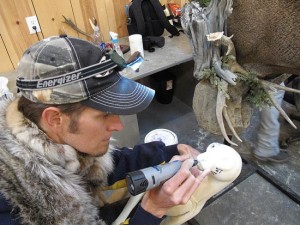 The following is a passage taken from my website, nssadventures.com, that might help you understand the art and purpose of taxidermy:

Taxidermy often gets a bad rap. The dead heads hanging on people’s walls often evoke negative feelings in non-hunters. They don’t see a glorious and noble beast, but a poor, innocent creature sacrificed purely for sport or to boost the ego of a heartless hunter. I have a hard time understanding this point of view because to me, that noble beast peering out from the wall is a tribute to the animal’s life, not its death.

All year long I admire and photograph both elk and deer in nature. I don’t particularly even like to kill them. But for a brief period in early fall our roles change from admirer and admired, to predator and prey. It’s a natural shift which always shifts back following the hunt. I know that hunting (by any predator) is a good and necessary thing which sustains balance in nature. I think the deer understands this too because all year long, whether I’m stalking with a bow or a camera, I’m treated like a predator, and the animal acts like prey. They don’t know anything else. This is why the biggest and smartest of them are so hard to hunt, and also why they deserve such admiration. 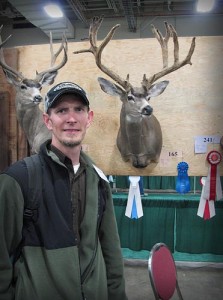 When I mount one of my own animals, I feel I’ve preserved not only the memory of a great hunt but the memory of a beautiful and admirable creature. I love wildlife as much as I love to hunt, and through painstaking care I can immortalize that special animal. If it weren’t for taxidermy, millions of beautiful beasts would still be harvested each year, but then discarded and forgotten. A quality taxidermist gives the animal a new home and continued life. 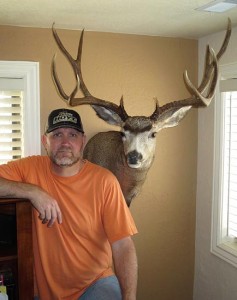 I won’t lie; I’m fairly new to the taxidermy arts. However, I’ve been doing European skull mounts for friends, family, and myself for more than a decade. My interest in taxidermy began in 2002 when I harvested a very large 4×4 buck and didn’t have enough money for a full mount. Through much research and trial and error, I was finally able to perfect a beautiful European skull mount on a custom-designed wood plaque. 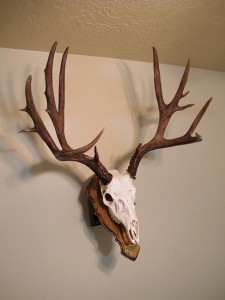 Years later, after mastering the European mount, I developed a keen interest in furthering my taxidermy skills. So in April, 2013, I went to taxidermy school and have been learning and expanding on my education ever since. 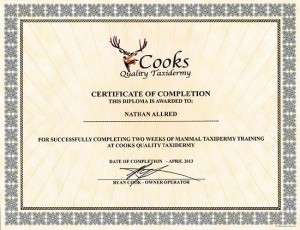