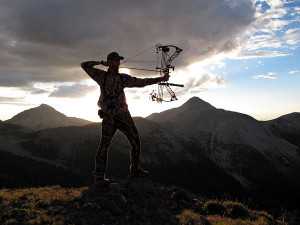 Advantages of Archery over Gun Hunting

Hunting big game with archery tackle is one of the greatest challenges a person can face, but it’s also one of the most rewarding. Stalking close to unsuspecting prey, and then harvesting that animal with a stick-and-string stirs the primal spirit and reconnects us with nature in a way that gun hunting can’t. But did you know that bow hunting also has several advantages over the gun? Let’s look at a few:

1) Early Seasons/ Late Seasons: In most western states, the archery seasons occurs before the rifle season. In Utah for example, the archery hunt begins in mid-August when deer are still in their relaxed summer routines which makes them more predictable and easier to stalk. They are also velvet-clad which keeps them out of the thick timber.

By the October rifle hunt these same bucks become hard-horned and tend to stick to thick timber, making them harder to locate.

States like Idaho and Utah also have archery-only, late season rut-hunts which allows archers to take advantage of giant, rut-crazed bucks which are much easier to locate after the rifle season ends.

2) Longer Seasons: Most western states have much longer archery seasons than rifle. In Utah for example the general archery season is 28 days long compared to the 9-day rifle hunt. It certainly helps to have time on your side, and having a season that’s three times longer will allow many more opportunities.

Cold weather wears on your overall attitude, thus compromising mental toughness. It’s far much easier to get discouraged when you’re cold and wet.

And finally, warm weather affords lighter clothing and less gear to pack around, making you quieter and more mobile.

4) Easier to Spot: Summer bucks wear a reddish-orange coat throughout August which makes them much easier to spot against green vegetation. They also run in bachelor herds well into September, and since there’s more of them, they’re easier to spot. By October most big bucks are running solo and holding tight to heavy timber during daylight hours.

5) Better Draw Odds: Probably the greatest advantage of archery is ease of drawing a tag. In the unit where I deer hunt, I’m guaranteed an archery tag every year. But gun hunters are only able to draw every other year due to high demand. This is an important archery advantage, because if you can’t get a tag you’re not going hunting!

The same advantage applies to limited entry and other high demand tags. In Utah it takes an average of two years longer to draw a limited rifle tag than a limited archery tag.

6) Quiet Weaponry Means More Opportunities: As any archer can attest, it’s just a matter of time before you sail an arrow over some unsuspecting buck that you’ve spent hours stalking. But if you have a quiet bow–as most bows are–you’ll likely get a second chance. This happened to me last year, and fortunately my second arrow got the job done.

Probably the worst disadvantage of rifle hunting is that all the deer on the mountain are alerted after the first rifle shot. After that, any deer with any sense goes into deep hiding and becomes extremely difficult to find.

7) Archery Makes You a More Skillful Hunter: Sure, there are many skillful rifle hunters out there, but shooting accurately is only half the battle, for both rifle and bow. When the deer are holding tight to timber, you’ll need to have some decent stalking and locating skills. That’s what the bow affords: it forces you to be quiet and patient, to slow down, and to learn everything you can about your prey in terms of behavior and habits. Inevitably, the byproduct of all of this extra effort leads to a deeper connection to nature and a richer hunting experience.

When I made the transition from rifle to bow, I was blown away by how little I knew about deer behavior, much less my ability to stalk close to them. I burned many tags while building these skills, but in the end I’ve become a far more effective hunter.

Above all, archery hunting makes the whole experience far richer than simply sniping deer with a long-range rifle. Long after the meat is gone and the antlers are nailed to the wall, that experience will linger on. And isn’t that what we’re really hunting for?

One thought on “The Archery Advantage”