Deer are NOT Where You Find Them

Has anyone ever told you, “Deer are where you find them?”

Maybe it’s a Utah thing, but I’ve heard that:

While scouting last weekend I found a group of big, blocky buck tracks in an unassuming area. Why were the bucks here?, I wondered. Were they moving from bed to feed, or vice-versa? Were they just migrating through? Was there low spot on the mountain that funneled them through here? I’m not sure, but I have my theories. If I can figure out why, then maybe I can intercept them during the hunt.

What does this have to do with hunting? Because wherever a deer is, he has a good reason for being there. Deer don’t take vacations, they don’t explore randomly, and they never wander aimlessly. If a deer is moving, he’s moving for a reason. Maybe he’s coming from feed or bed; maybe he’s trolling for a doe; maybe he was spooked by a predator and is following an escape route. Or maybe–God-forbid–he’s making random tracks just to throw you off! There are many reasons for a buck to move, and it’s your job as a bowhunting detective to figure out why.

Big buck tracks aren’t just pretty; they also hold valuable clues. For instance, if the tracks are meandering around vegetation, then it’s a feeding area. If the tracks are dug in, far apart, or appear to be running, then maybe it’s an escape route. 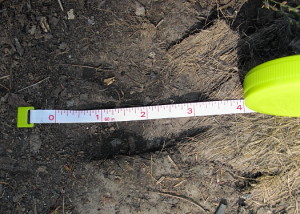 If the tracks are deep or appear to be dragging, then it’s probably a big, heavy, old buck. Maybe the tracks are old with debris accumulated in them, or new with sharp edges. You can pretty easily guess the age with a little practice. Also, what direction are the tracks pointing? Kinda important to know whether the buck is coming from or going to a certain area.

If I learned anything about deer over the years, it’s that they take things very serious–which makes them very un-human by the way. Everything a deer does, it does deliberately and purposefully. We can use this to our advantage. The important thing is that you get in the habit of asking questions, making logical theories, deductions, postulations, or just plain guesses. It’s better to wonder why a buck is somewhere than to wonder why he’s not. At least you have a starting point for the opener.

Nowadays when I hear someone say that things are where you find them, I cringe. It’s the ultimate cop-out. What I really hear is, “My brain is where I left it.” It means they’ve given up. They rely on sheer luck; no more thinking, no deducing, no more trying. Maybe they’ll stumble upon a big buck, but if not, oh well. It’s out of their hands anyway.

No one knows what really goes on in a buck’s head, but we can make some pretty good guesses which will lead to more success and more venison in the freezer. Feed, bed, water, migration routes, escape routes–all of these things should be running through your head. The next time you run across some big buck tracks, do yourself a favor and start asking questions. Lots of questions.