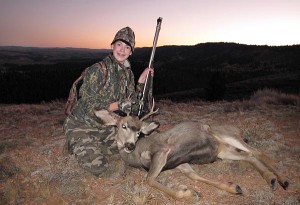 Three years ago I took my son Jake to the Sawtooth Range in Northwestern Utah for his first muzzleloader deer hunt. It was a bust. There were too many people and not enough deer.

While bowhunting on Monte Cristo last year I stumbled upon a promising new area that very few people know about. There’s a nice feeding meadow atop a steep slope there. The first day I stumbled across 3-point buck feeding leisurely, but passed on him in hopes that Jake would find it during the fall muzzleloader season.

In September (2011) I took Jake to that little meadow, but lo, there was no 3-point. Instead, there was a giant, heavy racked 4-point bedded near the opposite side of the meadow’s edge. At the same instance we spotted him, he spotted us and stood up, offering a perfect broadside shot at only 75 yards. Well, Jakey had only practiced shooting square targets, and as much as he struggled to get this mighty beast in his sights, he just couldn’t. Frantically, I whispered, “SHOOT, SHOOT, SHOOT, SHOOT…” But didn’t. Instead, the buck turned and disappeared into the trees. At that point I almost blew my lid. “WHY, WHY didn’t you shoot?!” I implored. Jake replied, “I couldn’t see it in my sights good enough.” I wasn’t entirely sure what that meant, but what could I say? I was a frazzled mess as we trudged back down the hill towards camp. The next day was a bust and we went home empty-handed.

The following year, in spring of 2012, I went to Sportsman’s Warehouse and bought Jake a life-size, cardboard deer target. Never again would he shoot a square, paper target. A square target looks nothing like a deer or anything else you’d find in the wild. So, he practiced on that deer-shaped target during the summer while we made plans to return to Monte Cristo and our secret little feeding meadow in fall.

On the second evening of the hunt, we climbed up the mountain and sat in the trees at the edge of the meadow. A little while later, just as the evening light was fading, we heard a rustling in the brush. Sure enough, a respectable 3×4 buck with tall antlers slowly materialized at only 75 yards away. It wasn’t the same great buck as before, but it was good enough. Jake got into shooting position, but the cover was too thick for a shot. Fortunately, the buck continued feeding along and started walking right towards us! At fifty yards the buck suddenly jerked its head up as it recognized us as humans. Jake was ready and shot. As the smoke cleared, we could see the big deer prancing down the hill unscathed. We walked over to where the buck was standing and there was no blood. Jake missed it, plain and simple. This time I wasn’t upset and just asked him what went wrong. After thinking about it for a minute, he figured he must have dropped the gun at the shot, causing the bullet to travel beneath the buck. In other words, he didn’t follow through. At that moment, the feeding meadow would forever be called, “The Learning Meadow,” as Jake was learning some valuable lessons there.

Monte Cristo is tough! The next day, there were no bucks anywhere near the Learning Meadow. Another lesson: you can’t shoot at a deer one day and expect him to return the next. On Monday, we sat in a promising new area with lots of deer sign. But Monte sucks, and we saw no bucks. Shooting light was fading fast when we decided pack it up and move uphill towards the Learning Meadow. Maybe we could catch a last minute buck out in the open. As we approached the top of the draw opposite the Learning Meadow, a deer suddenly jumped out of the trees right in front of us and bounded across the open sagebrush hillside. Right away, I could tell it was a buck; a small buck, but a legal buck nonetheless. I asked Jake if he wanted to shoot it, and he said yes. Unfortunately, the buck was bounding directly away from us and offering no shot. Jake dropped to one knee while I set up the shooting sticks, just in case it stopped. Near the top of the ridge, 120 yards away, the buck paused and turned broadside. Jake was ready. Through a cloud of white smoke we watched the buck drop straight down like a sack of potatoes. Neither of us could believe it!

Jake’s eyes were wide with excitement as he stood over his beautiful trophy. I congratulated him and told him I was proud. The buck fell only a hundred yards from the Learning Meadow. Later that night, we dragged that little buck right through the Learning Meadow on our way back to camp. We took a break there. The meadow was dark and mysterious, but the lessons Jake learned were still there, burning bright as day.