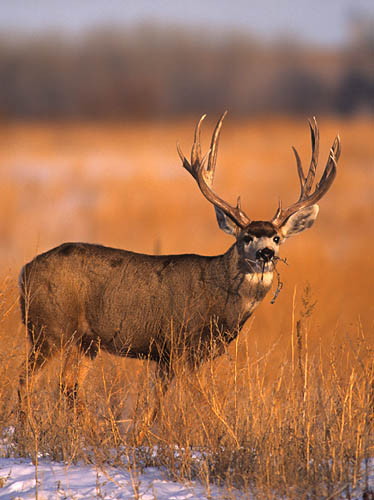 With the Utah archery deer hunt only a week away, I’ve been thinking a lot about mule deer, particularly their behavior and ecology. In reflecting on past hunts, I’ve come to realize that the biggest factor contributing to hunting success is having an intimate knowledge of your prey, whatever animal it happens to be. By learning your prey, you can more accurately dissect the mountain and predict their locations and movements.

I really love mule deer. Not only are they exciting to hunt, but these brilliant survivors are endlessly fascinating to observe in the wild. I’ve read just about every book and article written on mule deer and have kept careful notes along the way. Today I’d like to share some of the most surprising facts I’ve learned about mule deer.

1. In 1900 there were only 10,000 deer living in Utah; today there are more than 350,000! The main factors contributing to herd growth is better resource management, relatively mild weather in recent times, and an increase in predator control efforts. Considering that only 30% of today’s hunters are successful in bagging a buck each year, it’s surprising how many deer there really are out there.

2. Before 1950 half the bucks harvested in Utah were mature (3.5 years and older). Today only 10% of bucks harvested are mature. This is obviously the result of “quantity over quality” management, coupled with high demand for tags and the resource manager’s desire to maximize permit sales. For the trophy hunter you’ll have to sift through lots of deer to find a true trophy. In Utah only about 1 in 56,000 bucks harvested will make Boone & Crockett.

3. Using their sensitive snouts, deer can detect water up to two feet below ground and then use their hooves to dig it up. During hunting season water isn’t a concern unless it’s really hot and dry, in which case the deer must drink once a day. Because it’s so dangerous to travel to water, the deer will often sniff it out. The deer’s nose is estimated to be 1000 times more sensitive than humans. They also use their incredible sense of smell to find best food sources, find mates, and of course to sniff out predators like ourselves.

4. Deer have a 310-degree field of view, as compared to humans who see less than a 180 degrees. Not only can the deer see 86% of it’s surroundings, but he has amazing night vision and motion detection. For all of these strengths, however, it sacrifices the ability to see colors in the red spectrum and fine details.

5. Most big bucks are “hiders,” as opposed to “runners,” when encountered in high-pressured areas. If you typically hunt in dense cover, chances are you’ve been seen by far more deer than you think. The bucks that run are either small or know they’ve been spotted.

6. Mule deer antler growth exceeds two inches per week during spring and summer, and then greatly declines the first week of August. Final antler size is largely determined by three factors: age, genetics, and available forage. A wet spring and/or early monsoon season is your best chance to harvest a trophy buck.

7. The unusual form of bounding (called stotting) where all four legs leave the ground simultaneously, is unique to mule deer and was adapted to escape cougars in mountainous terrain. No other big game species in North America uses this unusual mode of locomotion. Not only is stotting useful for navigating heavy cover, but is done quickly, covering 22 to 29 feet with each bound on level ground.

8. The average home range for a deer is only .6 square miles. Since deer don’t like to wander outside their home range, it might seem easy for us hunters to locate a buck. The problem is that deer are highly adaptable to human pressure and will quickly evacuate the mountain to predetermined safe zone, sometimes miles away from it’s home range.

9. Elk compete directly with mule deer, especially on winter ranges. Although elk are 3.5 times bigger than a deer, biologists estimate that one elk is the equivalent of 5-8 deer in terms of winter range degradation. In areas where both elk and deer populations are high, elk will gradually replace the mule deer. The greatest long-term threat to mule deer, however, is the natural reintroduction of the whitetail deer which will likely force the mule deer into extinction! Enjoy the great muley while you can.

Fascinating creatures, aren’t they?! I hope you enjoyed these facts.