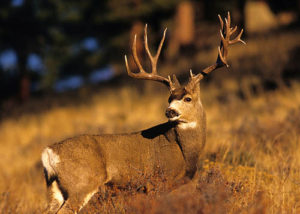 Opening morning and it’s on! But not really, because the deer are effectively off. With increased human presence this year, the deer have sensed danger and left the area. It takes 20 days of futile hunting before I really understand what has happened: All the mature bucks flipped the ON/OFF switch to OFF, and have become unhuntable!

That’s pretty much the story in Northern Utah last year. After several years of mild winters, deer numbers steadily rose to the point that the DWR issued more tags. It’s a traditionally difficult unit to begin with, but with the slightest increase in human traffic the deer simply left the area and/or became completely nocturnal. I’ve never seen anything like it!

So I hunted from the top to the bottom, bottom to the top, and north to south. In some real nasty country I found tracks and beds, affirming there were still in fact deer around. But as the sun came up each day, they were nowhere to be seen. It felt like the Twilight Zone. In 2015 I counted 8 different 4×4-or-bigger bucks, including one 200” typical. In 2016 I counted ZERO!

I spent one frustrating day hiking farther and farther into a really remote canyon—almost too remote for even elk. Just as I was questioning my sanity for bothering, two mediocre 3-points blasted out below me. Being completely stealthy on approach, I couldn’t figure out how they’d sensed me…unless they were completely neurotic…and that’s when it hit me: Bucks have the ability to decide whether to be huntable or unhuntable. It’s as simple as flipping a switch. Here’s how:

Mature mule deer bucks are bigger, stronger, and faster than us. They also see just fine at night, maybe even better than they do during the day (according to biologists)! Deer are always nocturnal, so being totally nocturnal simply means they don’t get up and feed during the day. They also don’t drink water each day which helps them reduce daytime movement. And no matter what any “seasoned” hunter tells you, deer are smart (well…comparatively). They are highly adaptable and need to be in order to survive extreme climates, terrain, and predators that they encounter every day. When spooked by a hunter, a buck easily blasts through tangled brush, taking special care to keep trees between him and you, all while following a carefully planned escape route. The hunter hasn’t the slightest ability to chase after, or even to relocate the wizened old buck which is capable of covering vertical miles with ease and disappearing for days.

For a deer, flipping the switch to OFF is probably not a conscious decision, but an instinct, and such a simple whim that it just happens without the necessity of thought. The buck spends a few days feeding and sleeping in some impenetrable patch of choke cherries on some ungodly-steep slope while waiting out the hunting season. I know because I found one of these very spots (I spent every day peeking behind every tree, after all). Sure there was deer sign in there, but it was so thick that I was literally climbing through with both hands. Visibility was only inches and the unavoidable cacophony of my approach would spook any deer long before I ever saw it. All I could think was, “This is exactly where I would be if I were a deer.”

So, what’s the solution? How do you beat the unhuntable buck? You can’t. It’s game over. In my case I left the mountain and hunted out of state. Everyone knows that increased pressured makes hunting harder, but there’s a tipping point where the buck decides to go farther and deeper than humanly possible. After years in the woods, he’s learned where these places are and when to use them.

One question remains: If a deer can become unhuntable, why doesn’t he just remain in that state all the time? Well, he’s an animal; naturally lazy, hungry, lonely, and curious. He doesn’t enjoy holing up on a hill if he doesn’t have to. He also knows that hunts are short and hunters eventually leave the mountain.

In the end, it comes down to hunting pressure. If an area has little hunting pressure, the buck might not even know the season is on and just goes about his summer routine. Becoming unhuntable is simply a tool he uses in order to survive during dangerous times, the same way he occasionally uses his antlers for fighting, and then forgets about them.

If you think about it, being invisible to man isn’t that uncommon in the animal kingdom. Deer share the mountain with much more elusive animals like cougars, bears, bobcats, badgers, foxes, etc. Many of these animals are nocturnal, but more notably they’re born with the natural inclination to hide from people. Comparatively, hooved animals like elk and deer are certainly shy of people, but not overly wary. For whatever reason they must learn to associate people with danger. It’s likely because we’re the only predators capable of killing them at long ranges…which is new and unnatural.

On the topic of long-range weapons, I’ve also observed the deer in my unit are holding tighter to the dark timber than they did in the past, even very early and very late in the day. It’s my belief that the popularization of long-range rifle hunting just within in the last decade is causing bucks to hold tighter to the deep timber where long-range rifles are rendered pretty much useless. Think about it: A group of bachelor bucks are standing in the open, and one suddenly falls over dead long before the report of the rifle is heard. The far-off shot is difficult to pin-point, and therefore difficult to avoid. The remaining buck’s only option is to dive into the timber and not come out. How many times will this happen before the old bucks stop coming out all together, and then teach their apprentices to do the same?

What is the future of deer hunting? Are deer getting smarter? Are they adapting to human predators as fast as we’re developing more efficient ways to kill them? If deer are bigger/faster/stronger than us, will there come a time that they are no longer huntable? All of these valid questions, and definitely up for debate. During a recent hunting seminar, someone asked the speaker if he thought deer were getting smarter. He replied, “No, I think deer are the same as they’ve been for thousands of years.” I quietly but wholeheartedly disagreed, and then wondered how much time this guy really spends observing deer in the nature.

All I know for sure is that I’ve watched deer become unhuntable, and since unhuntable deer quickly spoils my season, I’ve opted to hunt elsewhere, which is really the only option. Sure, I know the caliber of bucks in my old unit, but I won’t waste my time there. No matter where you hunt, there will always be another area with less pressure and huntable bucks. Remember, bucks hate people pressure more than anything, so you must avoid people with as much fervor as you hunt for deer.

2 thoughts on “The On/Off Switch: How Bucks Become Unhuntable”