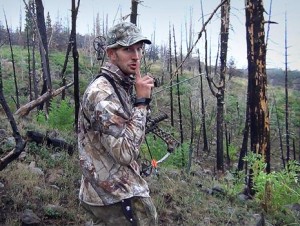 A long time ago I read a quote that always stuck with me:

Never make a liar out of a man by asking him where he hunts.  (author unknown)

Do you have a hunting honey hole? Hopefully you do, but if you flap your gums about it, I guarantee you’ll lose it.

For twenty-five years I hunted Utah from top to bottom. I started at the top, and now I hunt the bottom. Meanwhile I’ve lost some amazing areas. Some areas were affected by drought and poaching, but most were lost to kindness. How does this happen???

How we lose our honey holes

Humans–by nature–are kind and sharing creatures. When someone asks us where we hunt, we get excited and start spewing information beginning with, “Promise you won’t tell anyone…” Worse yet, we take a “trusted” friend or family member out to our secret area. In either case, that person inevitably extends the same privilege to someone else, and so on, and in a few short years your “secret” area is swarming with hunters and lost forever.

Don’t get me wrong here, I’m not advocating total selfishness here. As veteran hunters it’s our moral responsibility to help other hunters, especially youths and beginners. I take great pride in steering my fellow hunters towards success. But there’s no harm in keeping a little piece of the woods to yourself once in a while.

How to keep your honey hole a secret

A few years ago I missed a shot on a real monster-buck who was living a secret life on a steep mountainside in a nearby unit. When the season ended, dozens of family and friends asked me, a) how my hunt went, b) what I saw, and c) where I planned to hunt next season. My reply was: No, I didn’t see anything worth shooting, there’s no way I’m going back to that unit again, and no, I haven’t decided where to hunt next year.

I knew that the greatest threat to my future success at that buck wasn’t cougars, winter kill, or poachers. It was me and my big mouth! So I kept it shut.

What are best ways to keep your area a secret? Here are the three most effective strategies when dealing with prying questions:

Before we wrap it up, there are two other ways you can still jeopardize your honey hole without saying a word:

Here in the far-flung future, where an exponentially exploding population of all-consuming humans are decimating our finite and already-dwindling natural resources (aka game animals), secrecy in hunting can make all the difference between having grass-fed-organic, sacred venison on our tables, or resorting to caustic, mass-produced, over-priced store meat.

Sadly, when it comes to hunting we’re living in cutthroat times.  I don’t know about you, but that’s enough reason to keep my trap shut. It’s high time we hunters band together to save the endangered honey hole! 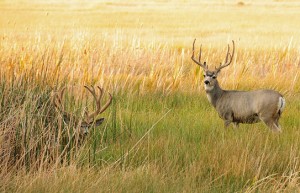 Most beginner hunters think there are two kinds of deer: spooked deer and un-spooked deer. What they learn over time is that there are many different levels of spookiness, or alertness.

When you encounter a feeding or bedded buck–which hasn’t detected your presence–you’ll immediately notice his relaxed appearance; ears low, eyes calm, head low, etc. When you encounter a buck that has busted you, it’s the opposite. All you’ll see is “dust and butts.” But somewhere in-between these two opposites is where most bucks reside.

The reality is that when the hunt starts, 99% of all bucks know it! They’ve heard the trucks and ATVs roll in, they’ve smelled the hunting camps, and more importantly they’ve been alerted well in advance simply by the angle of the sun and it’s relationship to the buck’s internal clock that sounds the alertness bell (right around mid-August in Utah). Also, if you’re hunting an area that has lots predators, the buck will be somewhat alert most of the time, even at night.

My few encounters with big bucks last year got me thinking about this. What I concluded was that in high-pressured public lands all big bucks live a daily life of alertness. The only times they aren’t on high alert is at night, or pre- and post- hunting season. Why is this important to know? Because your method of approach/stalk must be based on your accurate assessment of the buck’s level of alertness. For example, if the buck is bedded AND alert, then your approach will be much slower than if the buck is bedded and dozing off.

Based on this knowledge, I’ve developed a level of alertness system. It ranged from 0 to 5. Level ‘0’ means the buck is carefree and happy, there’s little predator presence, and there’s no hunt going on. Level ‘5’ means he’s turned inside out and running for his life! Your job as a hunter is to estimate which level the buck is at, and then adjust your approach accordingly. The following is a breakdown of levels.

Levels of Alertness in Deer

Level 0:
-The rare state of big bucks indeed. Only occurs pre- or post- season, like during scouting trips. (As described above.)

Level 1:
-The hunting season has begun, but the buck is bedded in a secure area with the wind at his back. His eyes are closed, ears pinned back, and chewing his cud. Or maybe he’s sleeping with his chin on the ground. Otherwise, he’s up and feeding, alone or with a small group, and has his head buried in the bush for long periods of time. Or perhaps he’s rubbing a tree low to the ground without stopping to look around.

Level 2:
-The buck is bedded but his head is up and looking around. He may have heard or smelled something, but not 100% sure. Or maybe he’s feeding sporadically, often lifting his head to scan the scene. Also, a buck on the move–like when he’s looking for a bedding or feeding area–will always be at level 2 or above because they’re always alert when moving from one point to another.

Level 3:
-The buck has heard, smelled, or seen something out of the ordinary. He’s staring in a particular direction for a prolonged period of time. This is often the case when a squirrel fires up, when forest birds go silent, or when there’s increased road noise in the area. Maybe he suddenly stood up in his bed. This is an alert buck scanning for danger. His head is high and his muscles are tense. In his mind he’s planning the safest possible escape route. However, if the threat never materializes, he may go back bed or feed.

Level 4:
-The buck is tense and ready to bolt. His eyes are wide, head is high, and ears are pinned forward. Sky-lining yourself, even at great distances, almost always triggers a level 4. Otherwise, he’s probably caught some of your movement or scent, or heard a non-natural sound, i.e. clanking of an arrow or breaking of a twig. Either way you are pinned down and he won’t stick around much longer. You either have a shot or he’s gone.

Level 5:
-It’s over; dust and butts! You are busted; the threat has been verified. You probably won’t see this buck again this year. This happened to me three times last year, and no, I did not see the big bucks again.

In future encounters with bucks I urge you to practice assigning levels of alertness. It’s a fun and handy tool, especially when hunting with other people. For example, when hunting with my wife I often cite the current assessment level of the situation. She may think I’m some kind of obsessive buck-nut, but she also knows what I’m talking about and will apply it to the stalk-situation at hand.