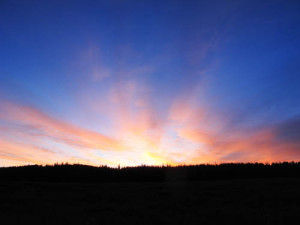 Where do you think the idea for ‘the force’ came from? When you first saw Star Wars you probably knew it was fiction, but did you also feel some familiarity with the concept of there being a ‘force,’ and that there might be some validity to it? When you were young, did you ever point at an object and command it to come to you? The idea of the force–in many ways–parallels the very real concept of the Zen-force.

For me, the familiarity of the force makes up a three-part triangle: 1) The fictional/fantasy/magic force that exists in movies and our imagination, 2) the religious force that we learn from our parents and society, and 3) the Eastern Zen Buddhism force (or just Zen) that exists universally but which we are vaguely familiar with. In this article I’m writing strictly about the Zen-force as understood by Western culture.

For more than a decade I’ve been researching and implementing Zen into my life in a practical way. Specifically, I discovered a general Zen-force via hunting and my deep connection with nature. Today, I continue to use the Zen-force in archery, bowhunting, and almost everything else I do. For all intents and purposes, Zen is similar to religion, but at the same time, far from it. Zen is NOT in conflict with religion. Zen is simply a higher level of consciousness which can coexist with any religion.

To give you a better understanding, think of Zen as a natural force that flows through all natural things…just like Yoda said. Then, think of life, or “the miracle of life,” that exists in all living things. No one can really explain where life came from (outside religion). For the most part, we just accept it and then take it for granted. So why would ‘life’ and the ‘life-force’ be separate or any different? In this respect, Zen is no more a religion than is the mysterious power that we call “life.”

Have you ever noticed that Yoda looks similar to an old Japanese Zen master? Do you think it’s a coincidence? Zen Buddhism originated in China in the 6th century A.D. and was later adopted, perfected, and practiced in for centuries in Japan. Zen is continually taught through various meditational methods including swordsmanship, calligraphy, dancing, and even flower arrangement. And surprise, surprise, one of the most revered Zen disciplines is archery. But what is Zen exactly, and what does it have to do with archery?

In 2002 I had a major paradigm shift. A few days after harvesting an impressive trophy deer, I had a sudden realization that my success came neither from my hunting skills nor luck. It felt as if some kind of unknown force was guiding me on my hunts. Years later I learned about Zen and was amazed at how perfectly it fit into my routine meditations and practices preceding and during every hunt.

For today, think of Zen as a oneness with the Universe. Oneness comes from humility. Zen can only be achieved through humility. Humility comes from realizing you are infinitesimally small relative to the infinite universe. You are not an ocean, but a single drop in a vast ocean. The ocean you are part of is unfathomably large and powerful. At the same time, your thoughts and feelings and the life you are living might seem big and powerful, but it’s really a tiny part of the whole. And that’s where Zen comes in: If you can take your tiny, insignificant piece of life and harness the infinite power of the whole universe, then there is nothing you can’t accomplish. Zen simply provides the keys that unlock this immense power.

On a final note, Zen is far easier to achieve in Nature because there are no distractions. Zen is associated with meditation because meditation is a practice of quieting the mind. In my early years of hunting, I couldn’t quiet my mind. I spent the days frantically flailing around the woods looking for a deer to shoot before I ran out of time. Consequently, I achieved low success. In later years I spent more and more time hunting (alone). I also spent a lot more time just sitting and breathing. I noticed after about three or four days my mind-chatter would quiet down enough for me to really be in the moment; the infinite now, as they call it. It was only then that I had wonderful success in the woods.

Nowadays, my spirit goes into the woods far before my physical body. My physical body is here, working, driving around, answering calls, etc., but I’m just going through the motions of a modern man. In reality, I’m already gone. My energies are focused on the impending bowhunt. I am living in a continual state of meditation and mental preparation; I am preparing the way for Zen in hunting.

See previous two articles on Zen in Hunting at: