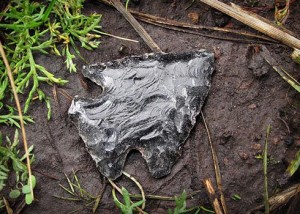 I always wanted to find an arrowhead. I felt a great romanticism in stumbling across an ancient bowhunting artifact that paralleled my own plight as a modern hunter. Well, in 2013 it finally happened. On opening morning I headed out across a steep ridgeline on my annual quest for deer. I laid my bow on the ground and pulled up my binoculars to view the new surroundings. When I reached down to pick my bow up, I noticed a small, shiny, black object lying right next to my bow. My heart leapt! For a second I imagined an ancient hunter following his instincts—just as I had that morning—and walking the same path that I was on. It was a wonderful, serendipitous moment.

Big bucks are like arrowheads. What I mean is, you might hunt for years and years without seeing a truly giant buck. But given enough experience, inevitably you’ll stumble across one. Still yet, it may take several more years before you actually bag one. But if you persist in strengthening your skills and keeping an open mind, one day you’ll wrap your hands around some trophy antlers. Eventually, it won’t feel impossible, but inevitable. It’s all about enlarging your vision of success.

Two weeks after finding my first arrowhead, I found a second one. I’d moved to an entirely new section of the unit, and after setting up camp I hiked to a nearby stream for some water. Just before I got there, my eyes locked onto another black, shiny object. This arrowhead was even bigger and more perfect than the first one. I’m not sure that it was entirely coincidence.

Bigger bucks are just like bigger arrowheads. It might take many years to finally bag a big buck, but once you do, they’ll come easier. That was the case in 2013 when I found two arrowheads AND bagged the biggest buck of my life, dubbed Superbuck. The story I wrote for that deer was based entirely on building bigger success off of previous success.

Entrepreneurs frequently tell a similar story: It took years and years to earn their first million dollars, but a very short time and a lot less effort to earn their second million. As it turns out, success has more to do with our state of mind than anything else.

So, what does it mean, “To enlarge your consciousness?” When I first read this quote, I asked myself the same thing. Was I infinitely UN-successful in my finances, relationships, hunting, etc, because my vision of life was too small? Was I limited by my own physical brain or the evolutionary chain to have a small consciousness? Was I limited by my upbringing or my peer’s influence to have low success? Yes, I think so. But I wasn’t about to let it stop me from having success in bowhunting. What I needed to do was enlarge my consciousness beyond the old style of hunting that I’d grown up learning. So I struggled, studied, and fought against mediocrity, and after years of doing my own thing, I was finally a hunter reborn.

When I set my annual goal to harvest a trophy deer, I envision a real monster buck with huge mass and a wide, sweeping set of antlers. I am conscious of the fact that there are at least one of these stud-bucks in every general unit in the state; I just have to find it. I can set this goal because I know I will consciously and subconsciously do things differently than other hunters who just ‘hope’ for a nice four-point. I am also conscious of the near impossibility of the goal, but instead of getting discouraged, I just try harder.

Click here for the next tip, Secret Tip #6: Put in the Time