Now that we’ve tackled the nature of man, good versus evil, and the entire Universe, I’d like to explore another quote by Emerson:

The stars awaken a certain reverence, because though always present, they are inaccessible; but all natural objects make a kindred impression, when the mind is open to their influence. Nature never wears a mean appearance.

When I read that ‘nature never wears a mean appearance’, I wondered what it meant exactly. Certainly I’ve seen some ugliness in nature. I’ve seen one animal killing another, and I’ve seen many-a-decaying carcasses. Surely these are ugly things, right? But, if my perceptions of these ‘ugly’ experiences are set upon the rule of nature—the rule that states that nature is neutral and therefore neither good nor bad—then perhaps I simply failed to see the beauty in death–death being a integral part of life–and instead projected my own negative emotions or misunderstanding of death upon nature. Then I remembered a photograph I made in 2010. It is the rotting carcass of a dead pelican washed up on the shore of the Salt Lake and encrusted with salt. 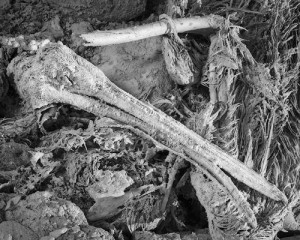 When I encountered and photographed this bird, I remember feeling rather neutral about it; it wasn’t sad nor ugly, but not beautiful either. Later on I found myself admiring the beauty and composition of the naturally arranged bones and feathers. Indeed, it was quite beautiful; as beautiful in death as in life perhaps. In a neutral and open mindset, there really isn’t any meanness or ugliness in nature.

Another example is my annual ritual of butchering a deer carcass on my kitchen countertop. Some people may cringe at the thought of cutting up an entire animal in ones house, as I probably cringed long ago. But amidst the blood and guts and bones and sinew, there’s a certain admirable order of things inside that deer. Even Mother Nature, as cunning as she is, surely could not create the miraculous complexity of this animal’s internal structure on her own. From snout to tail, the intricacy of this deer’s inner workings is brilliant beyond comprehension. It continually attests to a higher intelligence.

Each hour that I dissect the sacred meat and package it for future use, I feel closer to my maker. I come away from the butcher block glowing with insight and appreciation for the food I harvest. My role as a hunter and predator becomes clearer; it is a necessary and beautiful symbiosis with the planet. It inspires me to be a better conservationist of nature and preserver of our hunting heritage. Without fail, I am inspired to be a better person. In the thoughtful killing and butchering and ingesting this deer, there is never any meanness.

Finding God in Nature: Part 3 of 3