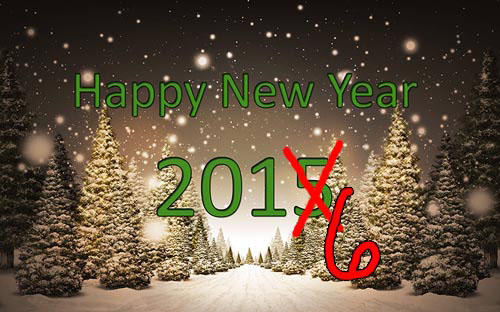 Thank good golly goodness 2015 is over!

Actually it wasn’t too horrible, but I sometimes accuse myself of being overly critical. Call me a pessimist, but I’ll argue that although it’s unhealthy to be too self-critical, the only other option is to be overly accepting of mediocrity in which case I would never achieve my lofty goals and instead recede into the apathetic quagmire of an aging inflataperson.

I entered 2015 with one goal: to shoot a 200″+ mule deer buck with a bow. It didn’t happen. I failed for three primary reasons:

After all that, I entered the Wasatch extended hunt, where I’ve never even seen a 200″ deer, and failed there too.

So 2016 will be different. I’ve mentioned many times on my blog that SUCCESS IS A DECISION. Last year, while wandering endlessly down empty game trails, an annoying inner voice insisted that success is NOT a decision; that there are simply too many variables working against me, and therefore I can’t make that decision. By the time the season ended, a stronger voice confirmed that success is in fact an easy decision, so long as you are willing to do whatever it takes, which means putting in the time and effort equal to the lofty magnitude of a 200″+ monster muley…and I did not do this.

So, this year I have one resolution and one goal only: a 200″+ mule deer buck with a bow. This year I will make it happen and here’s how:

That’s all folks. I hope all of you are setting high resolutions and standards for this coming hunting year. Remember, success is always a decision as long as you’re willing to do whatever it takes.

P.S. You can expect much more new blogs and information here in 2016. In 2015 I received tons of hunting related insights and revelations and took tons of notes in the field. All of this will be shared here in 2016.