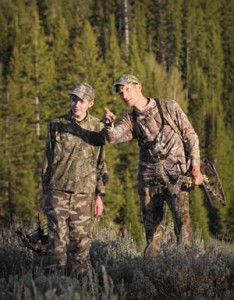 As a young deer hunter I frequently hunted with a buddy, whether it was out of fear of being alone or just to have some company. But in almost every case we both failed to get a deer. So I quickly learned to hunt alone.

The main reason why you shouldn’t hunt with a partner is because it doubles your scent, noise, and visibility to the deer. And since a partner will probably be chatting about something, it actually triples the noise you’d normally make.

An even more important reason to hunt alone is because another person is prone to compromise the crucial decisions you’d normally make while relying on your instincts. Often times, for no particular logical reason, I am compelled to go left instead of right. But my hunting partner is simultaneously compelled to go right! And when I feel I should travel uphill, he thinks we should go down. So instead of making a simple, subconscious decision to move left, you stand in the woods arguing your case. Eventually you compromise and go straight instead. The problem is, by compromising—by splitting the decisions equally—you shoot each other in the foot. Your God-given instincts are rendered useless. You cease to be a predator and suddenly become a lemming. That drives me nuts! That’s the main real reason I hunt alone. Other than elk hunting where you might need a caller, I can’t think of a single situation where it would be beneficial to have someone hunting with me.

This of course doesn’t apply to teaching children and first-time hunters. Each year I participate in other people’s hunt, whether it’s my son, my wife, a friend, or a family member. It’s important for me to pass along some of the wisdom and woodcraft I’ve earned after two-and-a-half decades of deer hunting. But these are special cases, and I’m usually not the one hunting anyway.

I still occasionally break my own rule. Sometimes just for fun, or out of pity, I’ll let someone tag along with me on my personal bowhunt. The fact is, some people just haven’t learned to hunt alone, or maybe I’m bringing someone to a new area and want to show them around. What I’ve noticed with most “buddy-hunters” is that they’re usually stubborn know-it-alls. The reason they don’t hunt alone is because they haven’t learned that they should! These people follow me around all day, and sometimes they even heed my advice. But for the most part they go right back to doing their own thing—what they’ve always done—thinking it’ll work out, but rarely having success. When I hunt with these people, I have little or no expectation of success for either of us. Sometimes I don’t even take my bow out of the sling.

One of the greatest lessons I’ve learned in life is that you can’t help people who aren’t willing to help themselves. You can lead them to the best areas, but they’re gonna make the same mistakes they always made: underestimating deer, making too much noise, moving with the wind instead of against it, over-packing, resting when they should be moving or moving when they should be sitting. In the end, it’s not so bad because I actually learn more from unsuccessful hunters than successful ones.

When hunting alone, safety is my only concern. Some areas—such as the High Uinta Mountains—are just too big and rugged to venture into alone. One false step and no one will ever find your body. But that doesn’t mean I’m required to hunt with someone; I’m really just hiking and camping with them. In the morning when the hunt begins, I’m going out  on my own. In dangerous areas it’s good to have someone else in the general area—just not right next to you.

In two decades of bowhunting, I haven’t arrowed a single animal with someone standing next to me. Bowhunting is not a team sport. If you have a regular hunting partner, that’s great. Just make sure you set out in opposite directions before your hunt begins.

Click here for the next tip, Secret Bowhunting Tip #5: Enlarge Your Consciousness